Camping is a wonderful thing. Getting back to nature, kicking back with a cold one, breathing in that clean country air – everything about it is a joy. Except maybe putting up the tent. 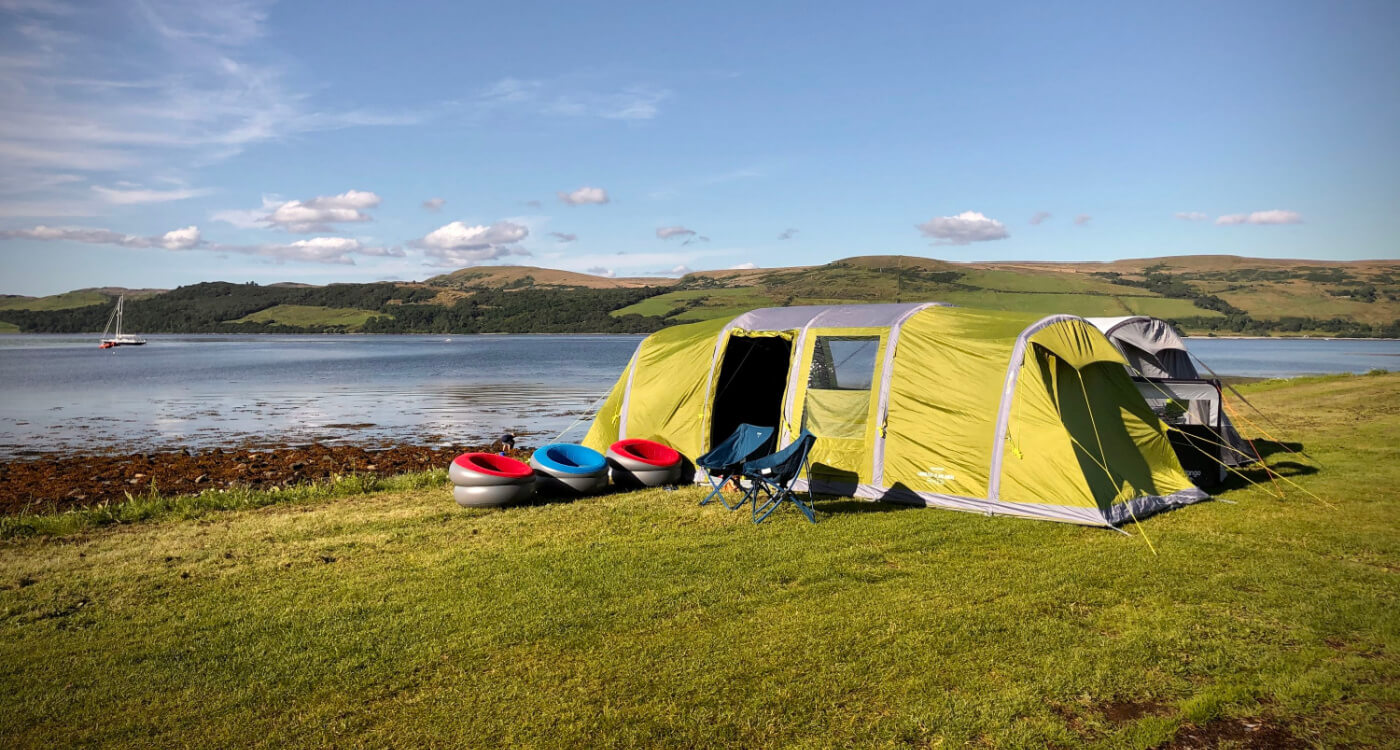 Wouldn’t it be great if we could just skip that part and get straight to exploring nature or relaxing with family?

Pitching a tent can be hard work, especially if the weather is a little on the inclement side, but that’s where inflatable tents can help. This guide has been updated to include 2021 product ranges, so you know you’re getting the very latest and best inflatable tents.

If you just want a quick look at the best air tents, see below:

What are inflatable tents? 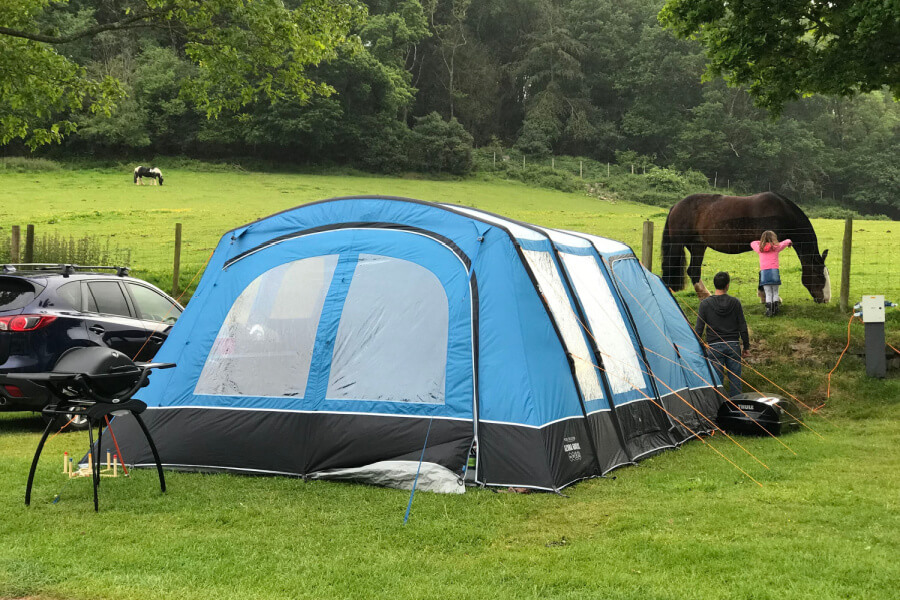 Inflatable tents (or air tents as they’re otherwise known) are just like any other tents, except for one significant difference. Instead of having traditional poles made from metal, plastic or fibreglass, the tent uses inflatable beams, pumped up to provide the structure.

Vango was the first company to really bring inflatable tents to the mainstream camping market with their AirBeam series. It remains, arguably, the most popular tent range around. Other companies have joined the scene now, however, with tents from Zempire, Outwell, Kampa, and more, all of very high quality.

They’re inflated just using a pump, meaning you don’t have to worry about poles, that you can’t quite get to bend properly or get lost inside their little sleeve when you’re putting the tent up.

How do inflatable tents work? Check out this video below to see just how easy it is…

Generally speaking, they’re also a lot faster to erect than traditional tents, and some can go up in a few minutes. Some may take longer than others, but, on the whole, the process is smoother and more streamlined.

Why use an inflatable tent? 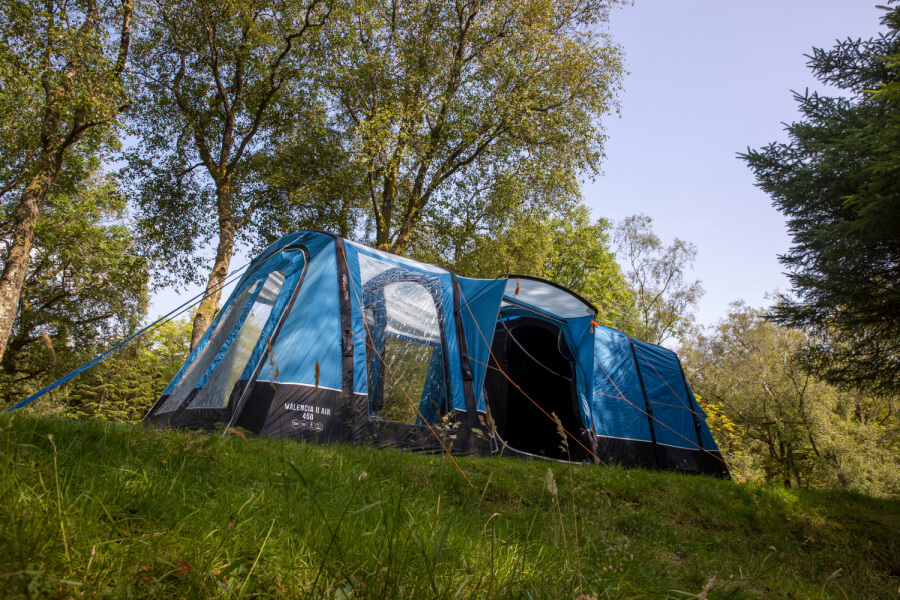 Well, the most obvious reason is the time it takes to put up and take down. When you get to your pitch, you don’t have to spend nearly as much time erecting it, meaning you’ll have more time for exploring or relaxing.

Just imagine the looks on the faces of your fellow campers as you turn up to the campsite after them and finish putting your tent up before them.

We’re not just talking about the small tents. Even the largest air tents can be erected in literally minutes. You can have a large, high-quality, eight-berth family tent in just 15 minutes. Think of how much time you’ll save.

Being lighter, air tents are easier to lug around with you, which is particularly handy if you have to walk a distance to your pitch.

You also don’t need to worry about broken or bent poles and trying to mend them using duct tape or whatever else you have lying around. 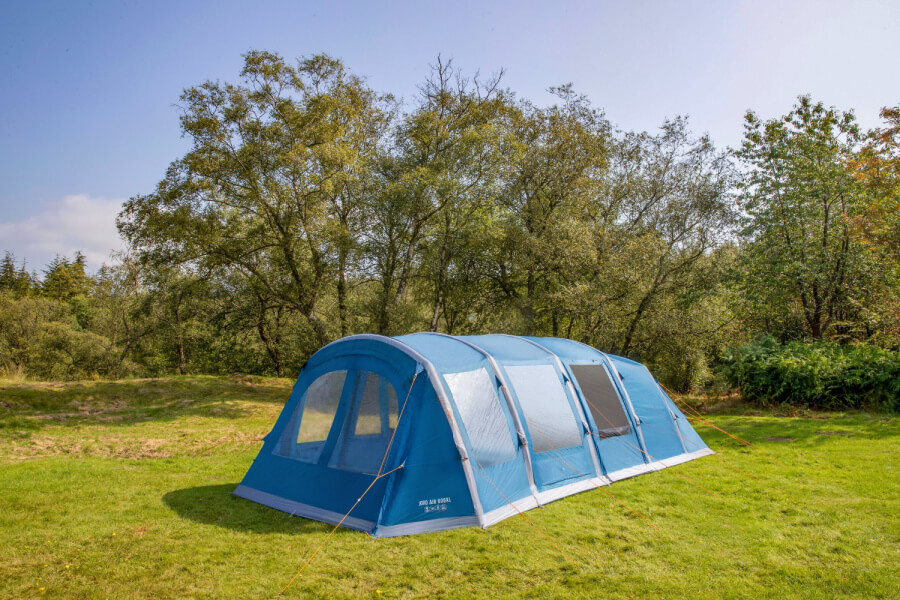 We’re not talking about some cheap novelty tent here. Air tents are created to an incredibly high standard and are no less reliable than their poled alternatives.

Regular tents can withstand a fair bit of battering but will get damaged if not cared for, and the same goes for inflatable tents.

As for punctures, they are incredibly rare. As with all tents, just be mindful of any particular sharp objects and ensure you pitch the tent on a level surface, clearing away rocks and any other nasties.

Simply, look after it and you won’t have any issues. Most tents come with a puncture repair kit in the unlikely case you do happen to get a puncture, while you can purchase replacement inflatable poles for some models (the Vango AirBeam series, for instance). These replacements are very easy to fit with minimal fuss.

Some air tents have one continuous airflow through the whole structure, whilst others use separate inflatable poles. However, even if tents with a continuous airflow get a puncture, it won’t collapse on top of you in the middle of the night, as you can close off each section inside the tent. 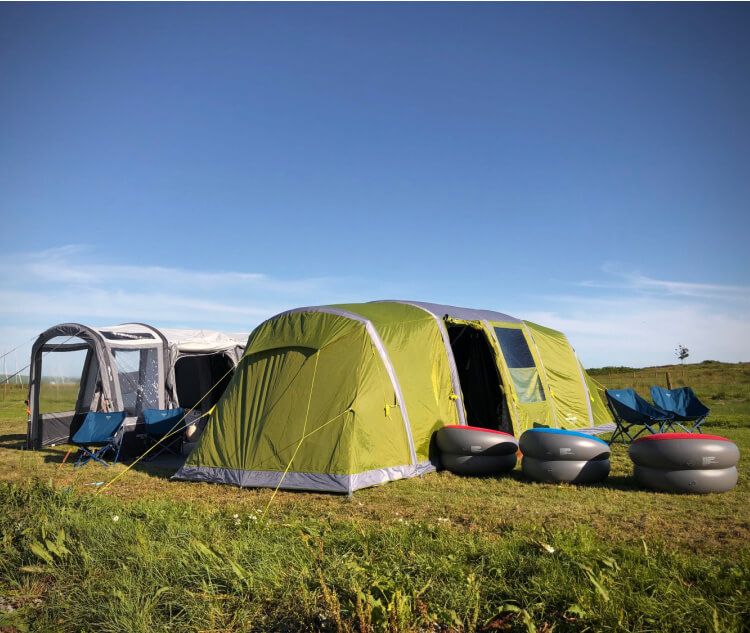 Well, the title of the best inflatable tent is somewhat subjective – it really depends exactly what you’re looking for. Do you want something small and cosy or an inflatable tent with room for the whole family?

Here are just a few of our favourites… 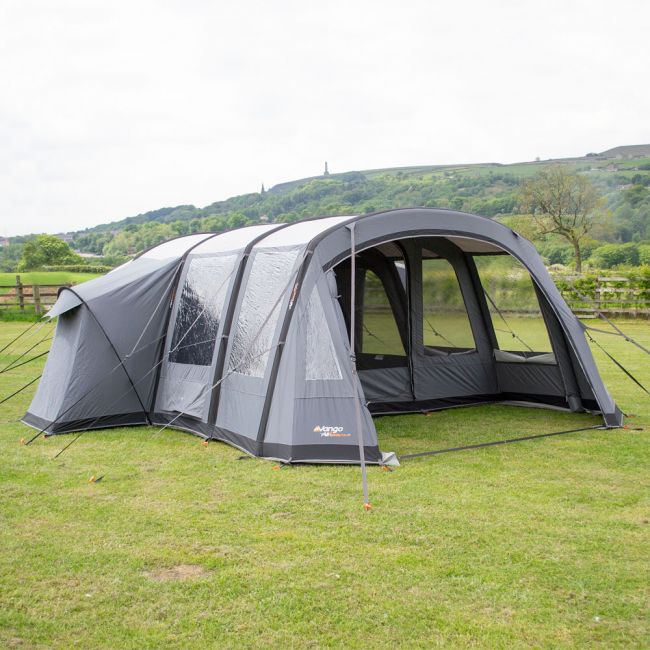 Another exclusive to Winfields, the functional tunnel design of the Kielder 5 Air tent is packed full of useful features. Ideal for families, accommodating five people, this tent has been updated for 2021 and includes a spacious living area with daylight ceiling panels to allow much more natural light into the tent. Weather-protected ventilation can be found at the front and rear of the tent while the large front canopy further adds to the space. 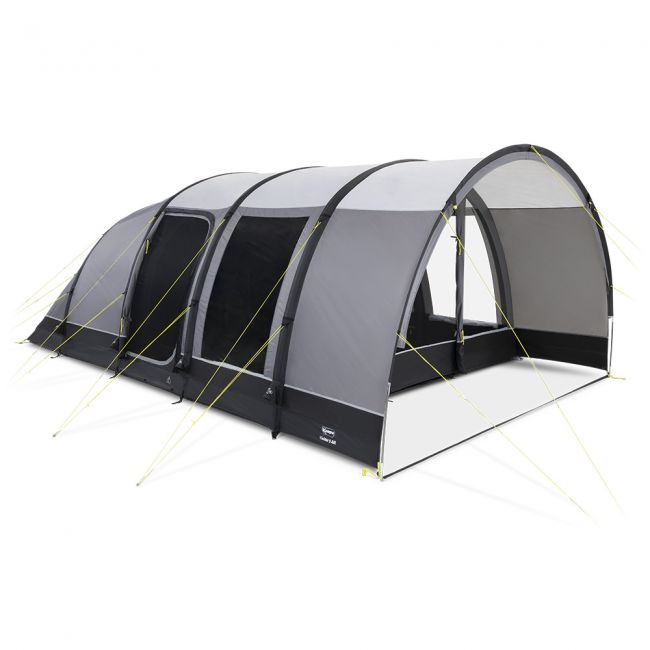 Introducing the stunning Ozone 6.0 XTR Vario Air tent from Outdoor Revolution. Exclusive to Winfields, this tent features extra-deep ‘King Deluxe’ bedrooms, dark in colour and positioned at the darker coloured rear-section of the tent for a great night’s sleep. Perfect for long weekends away, this tent has an enormous living area which feels spacious and wide thanks to the lighter material used around the windows and use of sky lights. 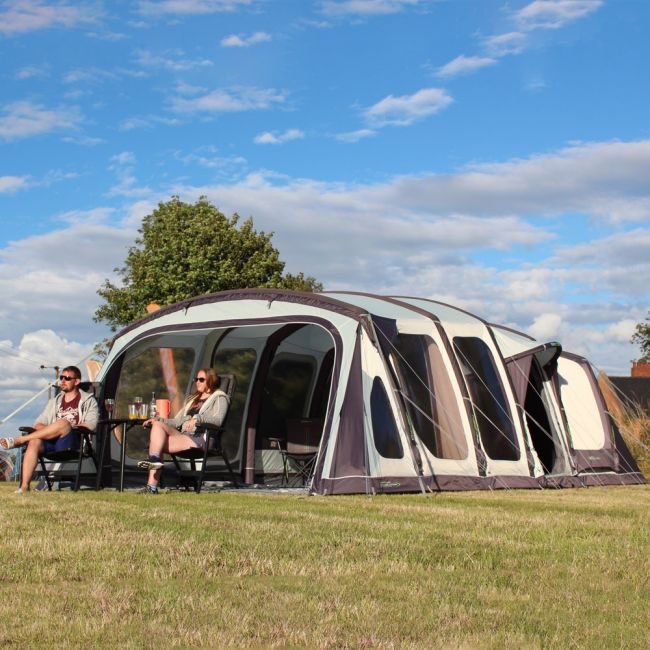 Hopefully, you know a lot more about inflatable tents than you before, and these are just a few of the amazing air tents available at Winfields Outdoors. Check out our full range online today for exclusives from the biggest camping brands.

Click on the links for more camping essentials to take on your next adventure. 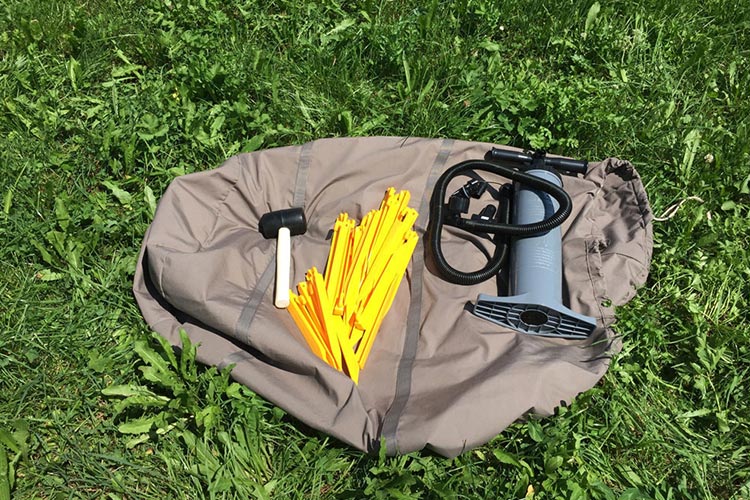 How To Correctly Pack Away Your Tent

Whether you’re checking over before heading off on a trip or getting ready to come home from your adventures, you need to know how to pack away your tent. An expedition, festivals, Duke of Edinburgh,  or just a camping holiday, tents come in all shapes and sizes, so each has their own trick for packing […] 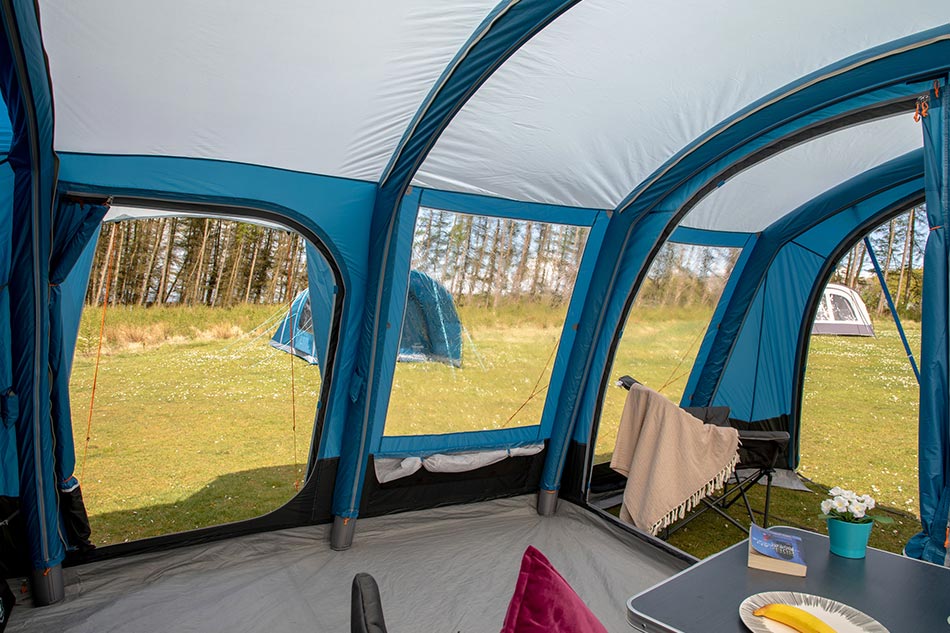 If you’re an experienced camper, you’ll know that your kit and gear can be damaged – so it’s best to have spares. The same goes for your inflatable tent. While traditional tent poles are prone to breaking, air tubes aren’t exempt from going faulty, either. Although air tubes should last for years to come thanks […] 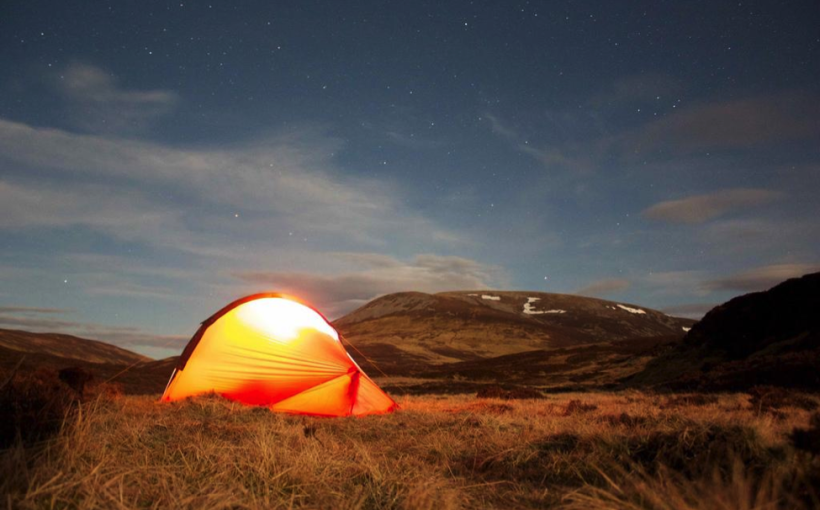 A one-man tent is ideal for single campers, backpackers or hikers who are camping solo and don’t want to carry too much kit with them. Whether you’re pitching up at a campsite or bedding down on a mountainside, a one-man tent should protect you from the elements and provide you with a comfortable and functional […]